If you would describe the works of Aliki van der Kruijs in one sentence, the phrase would probably be a fluid chain of the following key words: water, blue, textile, trance. Her textile works paint the drops of a rainfall or the cadence of the sea. They’re always blue. And they set the mind to a poetic trance.

Her story starts with textiles. Or rather, blue. In 2009, van der Kruijs starts her career as a concept developer at G-Star RAW, the famous Dutch denim brand, after graduating in fashion at ArtEZ in Arnhem. At G-Star RAW she develops almost an entire bible on denim. A year later, van der Kruijs checks in at Amsterdam’s Sandberg Instituut to study arts and ends up taking a residency at the Zuiderzeemuseum in Enkhuizen.

The Dutch museum is dedicated to life in the region before the building of an enormous dyke in 1927 (Afsluitdijk), shutting down a part of the incoming sea to avoid further devastating floods. In an historic house in the outdoor part of the museum, van der Kruijs experiments with old washing techniques and Reckitt’s Blue, an old synthetic version of lapis lazuli used to whiten shirts – blue enforces the appearance of white in textiles. Van der Kruijs designs button-up shirts by overlapping the patterns of an archetypal blue-collar work shirt from 1900 and a typical contemporary white-collar shirt. 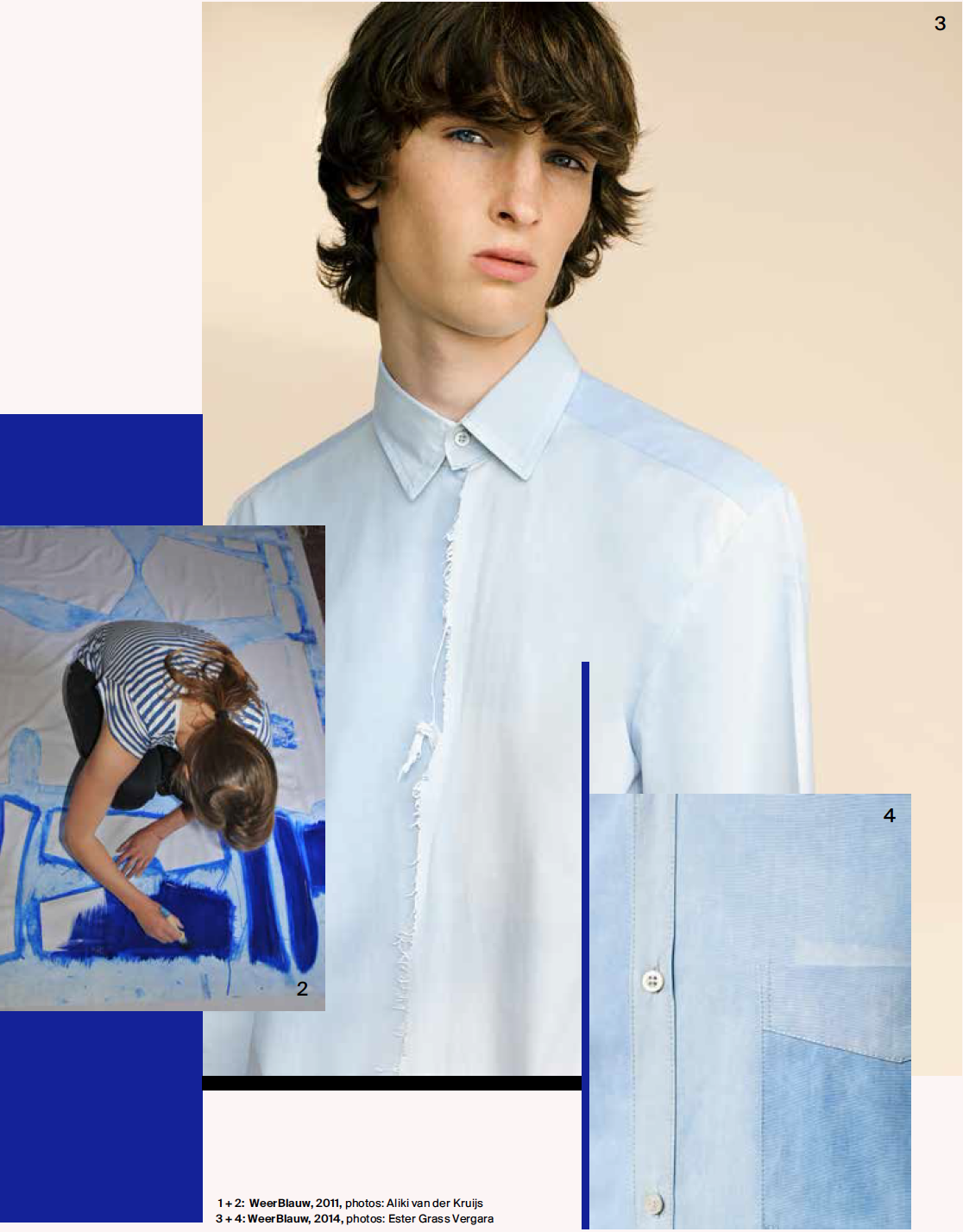 The shirts are left hanging outside to allow the weather to take part in the design process: the sun bleaching the shirts, the storm tearing them apart. Van der Kruijs writes down the weather conditions on every shirt. ‘This project is a blueprint of my work process,’ van der Kruijs says. She wants to catch the phenomenon of water in textile patterns.

In 2012, Made By Rain came to be. ‘I asked myself: how can I make rainy weather wearable and bearable at the same time?’ For this project she developed a technique called ‘pluviagraphy’. She printed a blue film coating on scarves that is sensitive to water and left them hanging in the rain, thus creating an authentic rain print. And as with her earlier experiments, every piece comes with a notation of time, location and weather. Made by Rain emanates the poetry of an ordinary phenomenon. With this poetic power and a profound love for the colour blue, she obviously ends up in Japan, the land of indigo dyeing and Zen poetry. Think of Nendo’s Rain Bottles, or Rei Naito’s Matrix installation at the Teshima Art Museum, consisting of nothing more than little splashes of water running along the floor like quicksilver. ‘I feel very connected to Japan and did three residencies there. In The Netherlands they find my work “nice”. In Japan, they are literally flabbergasted.’ 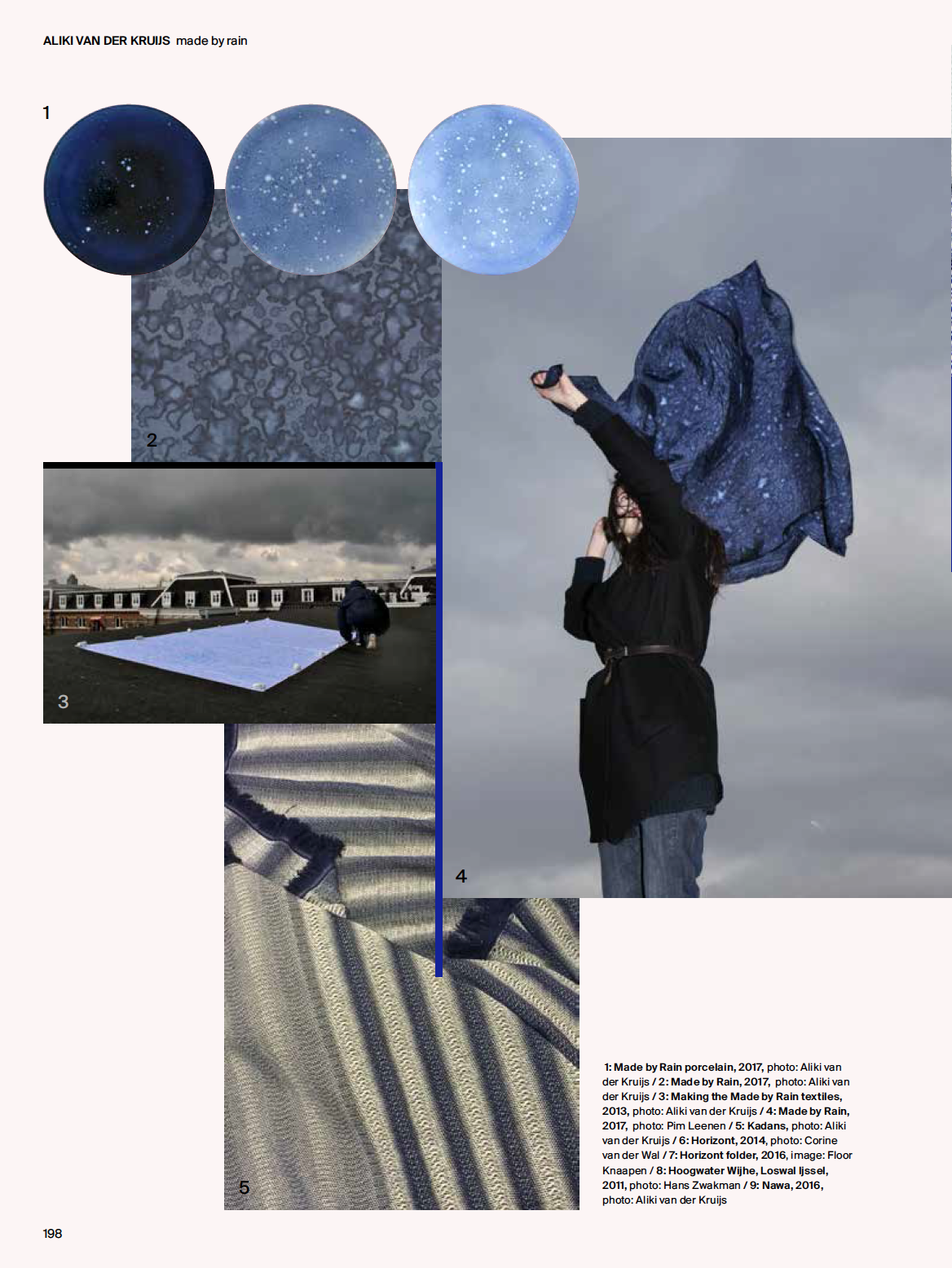 During a stay in Arita, located in the Saga Prefecture to the south of the country, van der Kruijs designs porcelain with raindrop motifs. This is an exceptional spin-off from textiles. ‘Ceramics are solid while textile is fluid like water itself,’ she remarks. Also in Japan she learnt Kurume-Kasuri, a complex weaving method solely using white and indigo dyed thread. ‘Mixing the white and blue thread is almost like coding.’ 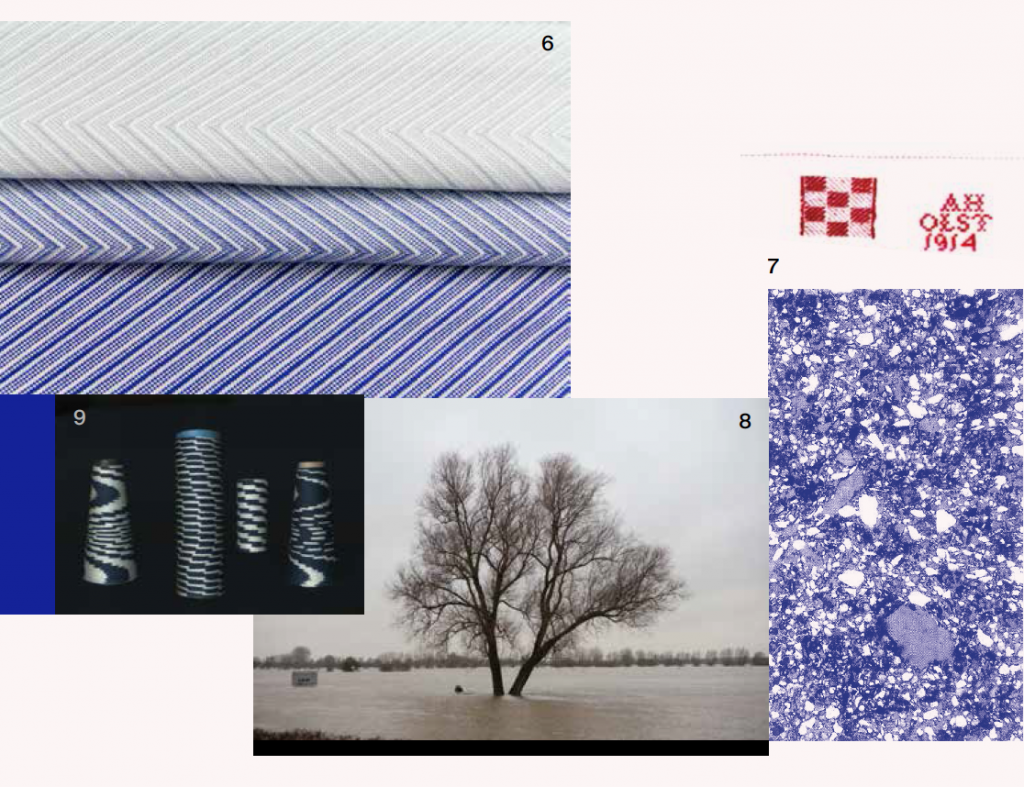 ‘Coding’ is an interesting word in relation to van der Kruijs’ design process. Although her work evokes a great sense of poetry, maths or science aren’t far away. Her project Horizont is a perfect example of that. ‘I was asked to design a product that defines the identity of the IJssel Valley, where a gully is dug next to the IJssel river to prevent flooding. I decided to retrieve the data from the soil-drills they did to investigate the ground and translated this data into a weaving pattern.’ Every pattern refers to a certain soildrill point.

With the Kadans project, van der Kruijs creates a print (together with Jos Klarenbeek) based on data of the cadence of the sea. Instead of simply illustrating the cadence, she really digs into the core of the subject like a true phenomenologist – she’s a fan of Goethe, who described the nature of clouds, plants and colours. ‘If I were to simply illustrate the cadence of water, I wouldn’t be capturing what it’s really about. Behind the appearance of things there’s a great deal of science that explains the working of it. I try to visualise that in order to describe the core of the phenomenon. You know, there’s a lot of poetry in science.’

The intense bond with water and rain isn’t just a typical Dutch thing but also a family characteristic. ‘A couple of years ago my uncle gave me 12 year-calendars of my grandfather, who apparently described the weather every day during 12 years.’ Take 6 March 1992, for instance, which states: ‘Again rain this morning, later on the day sunny and about 15-16 degrees.’ Dry data or poetry? We leave that up to the reader.