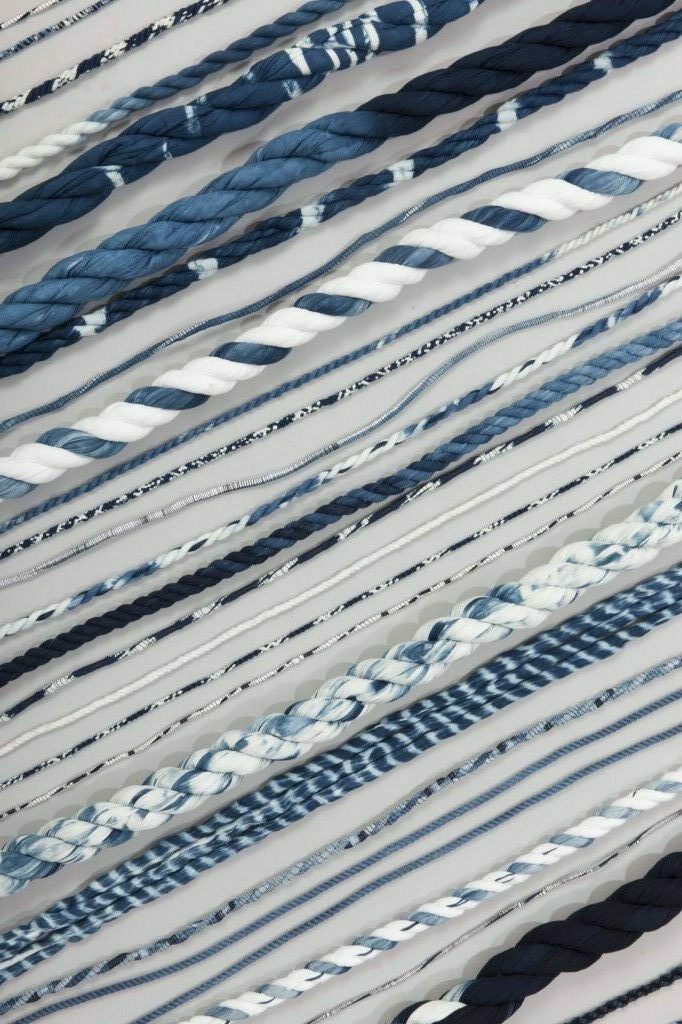 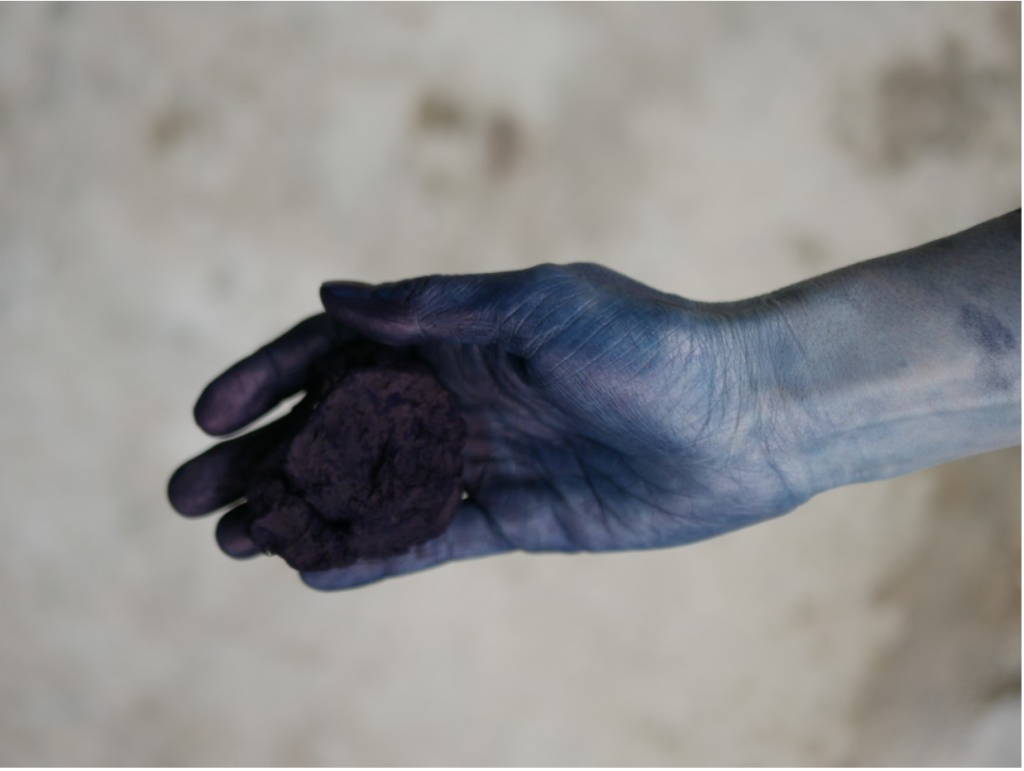 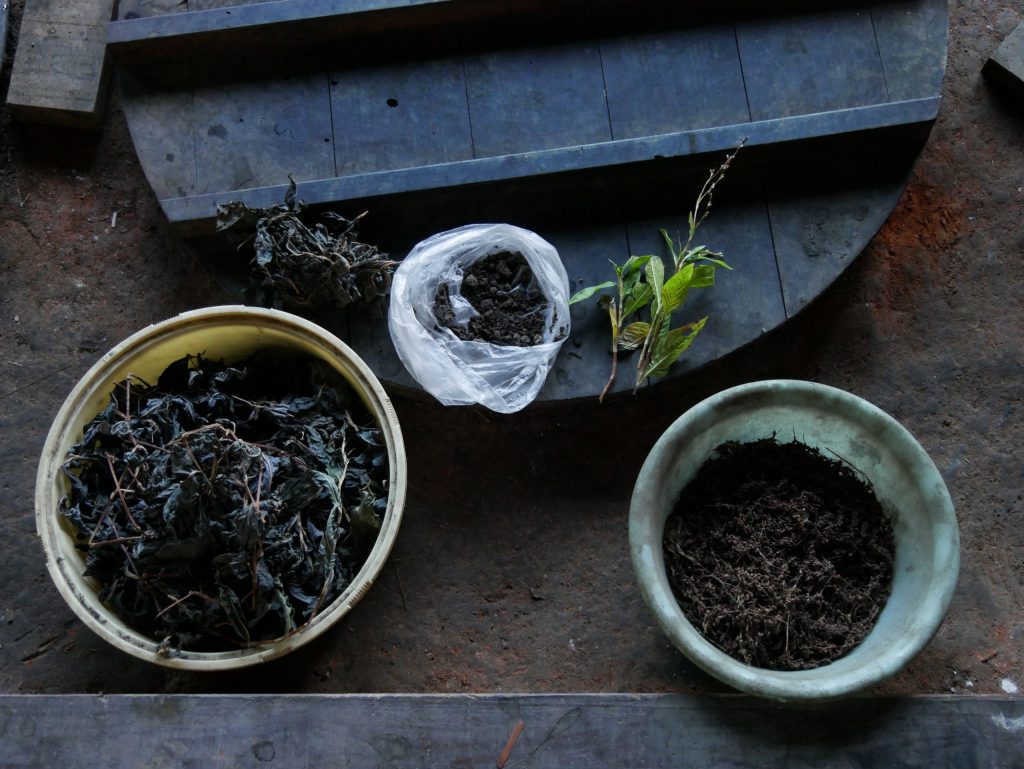 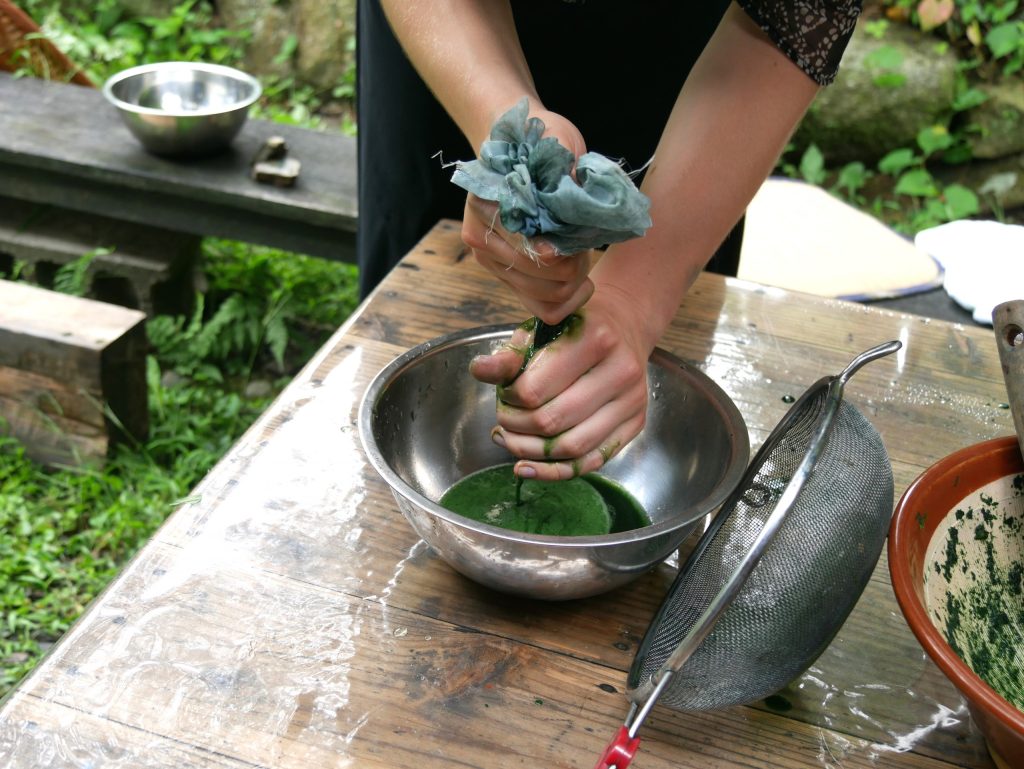 On how a line settles in a story.

Study on indigo and Kurume-kasuri during a craft-exchange research trip to Japan. On invitation of the Dutch Crafts Council I could spend three weeks in Kurume, Fukuoka Prefecture, to learn about the many steps to take in the proces of Kurume-kasuri.  Before weaving, cotton yarns are dyed with indigo which gives in the weaving a quality of soft edges ( or glitches) that arise mostly in geometric patterns. As part of the research I developed a serie of yarns and ropes based upon the kasuri technique to play with the ways the yarn can be ‘coded’ and make potential patterns. 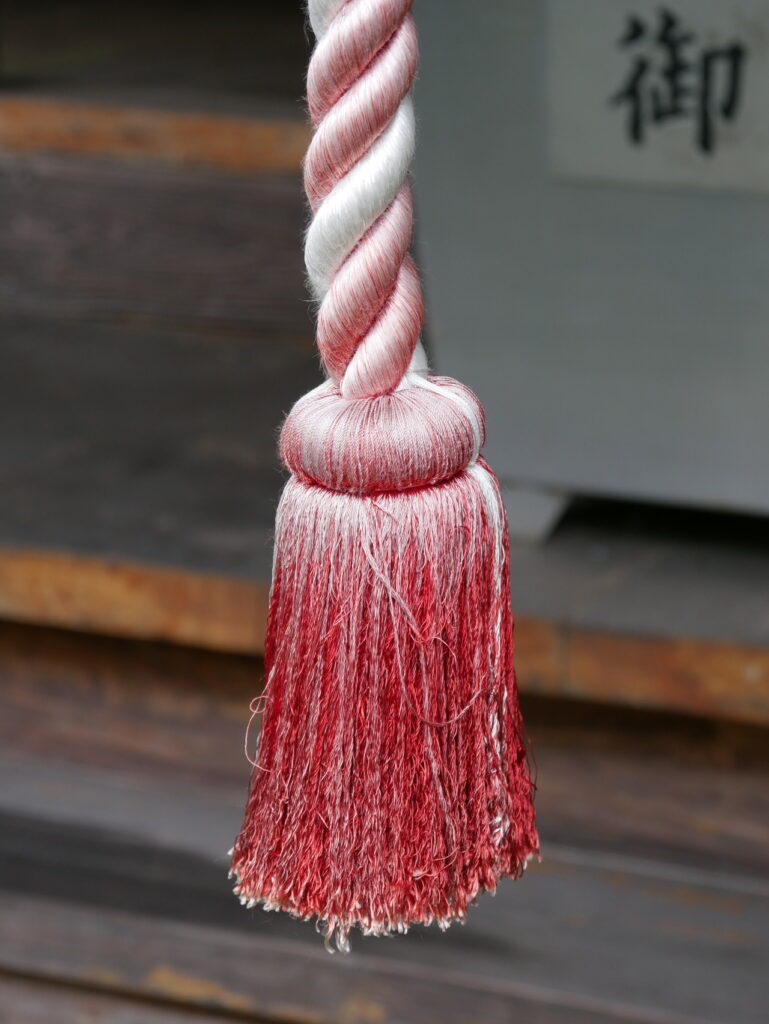 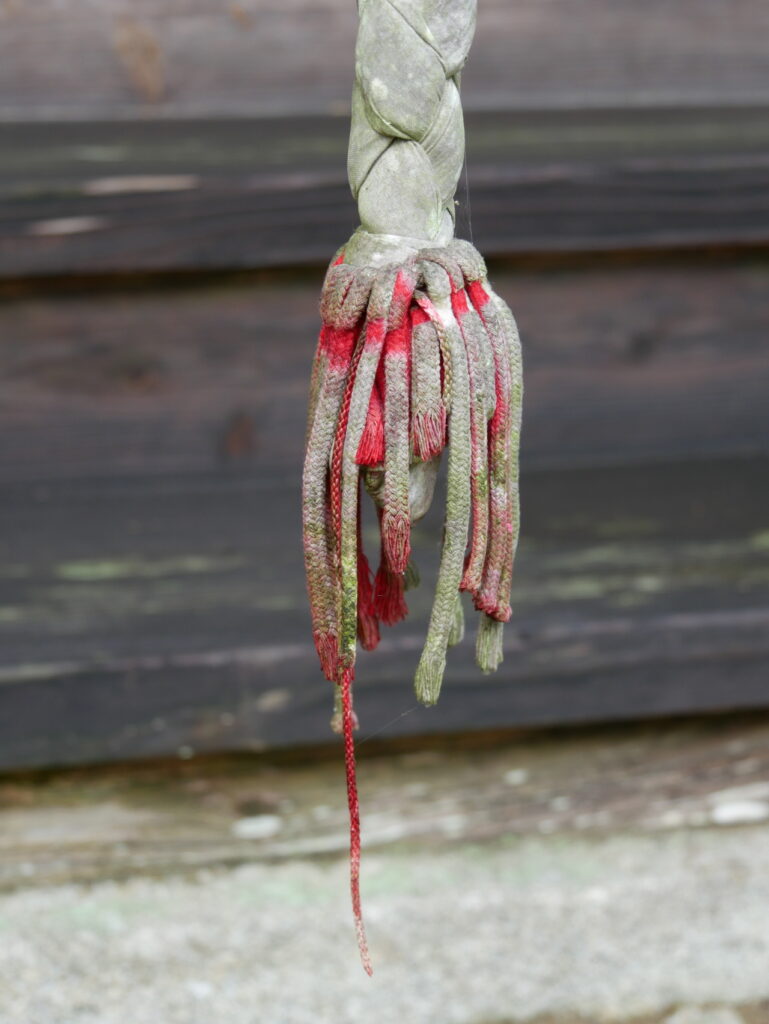 Weathered ropes in shrines form a natural kasuri coding and inspired to work intuitive and create interventions in the mathematical kasuri system to result unexpected patterning. 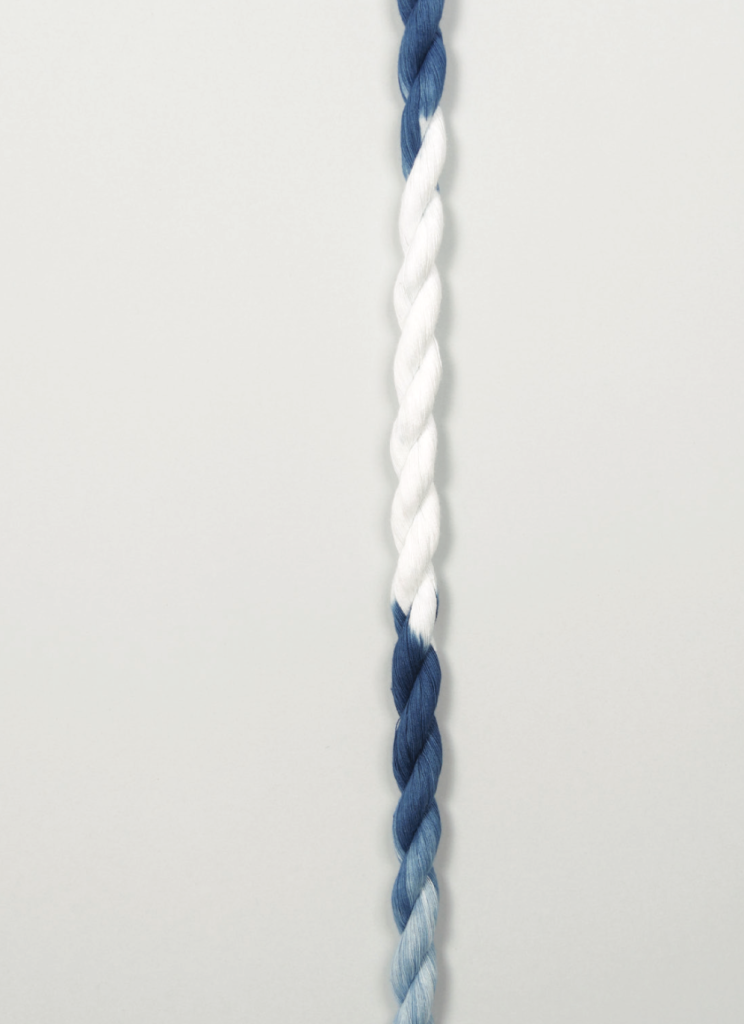 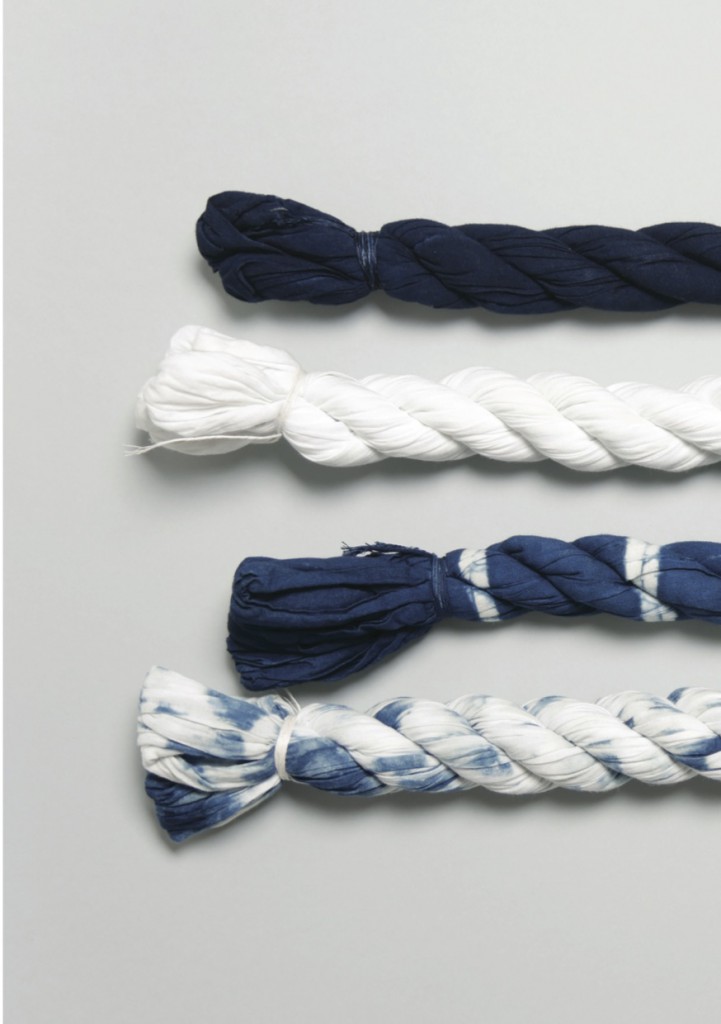 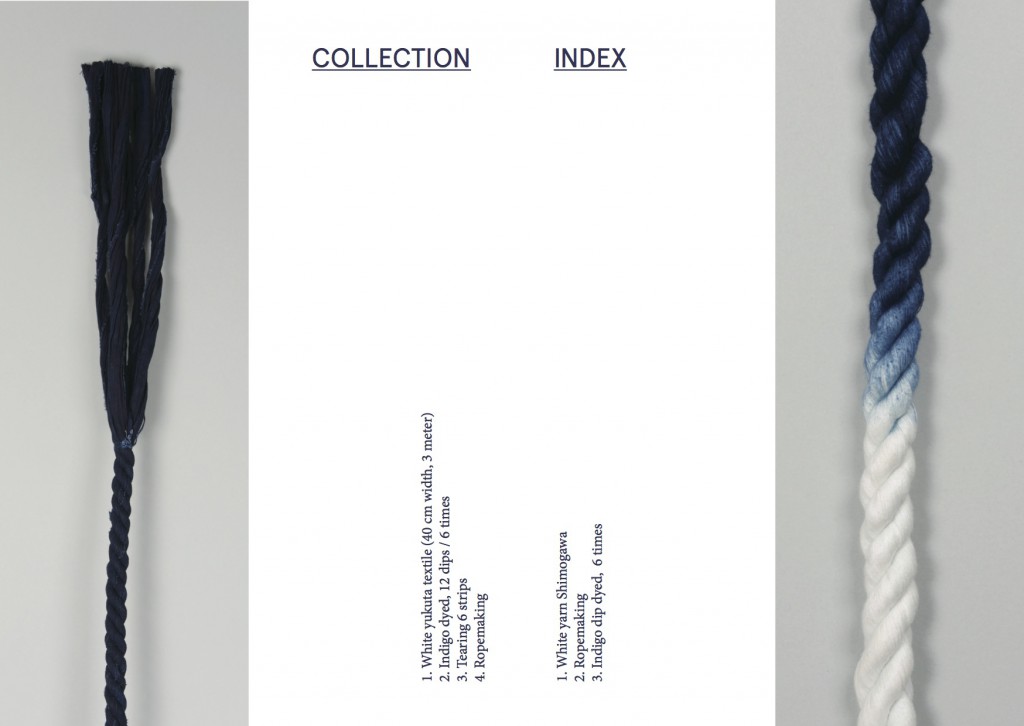 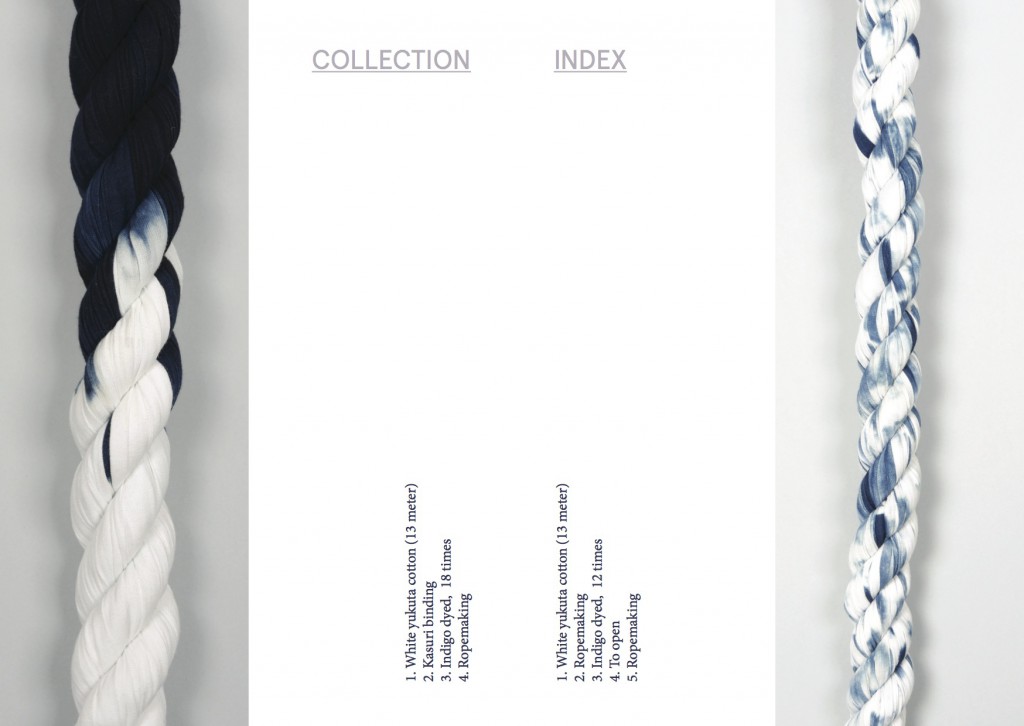 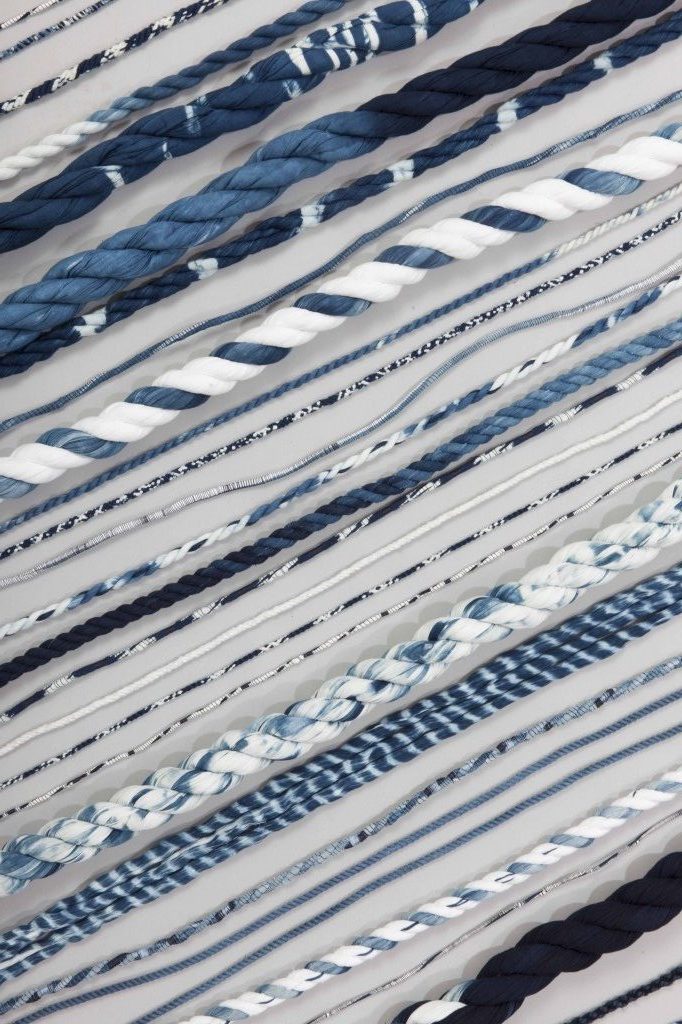 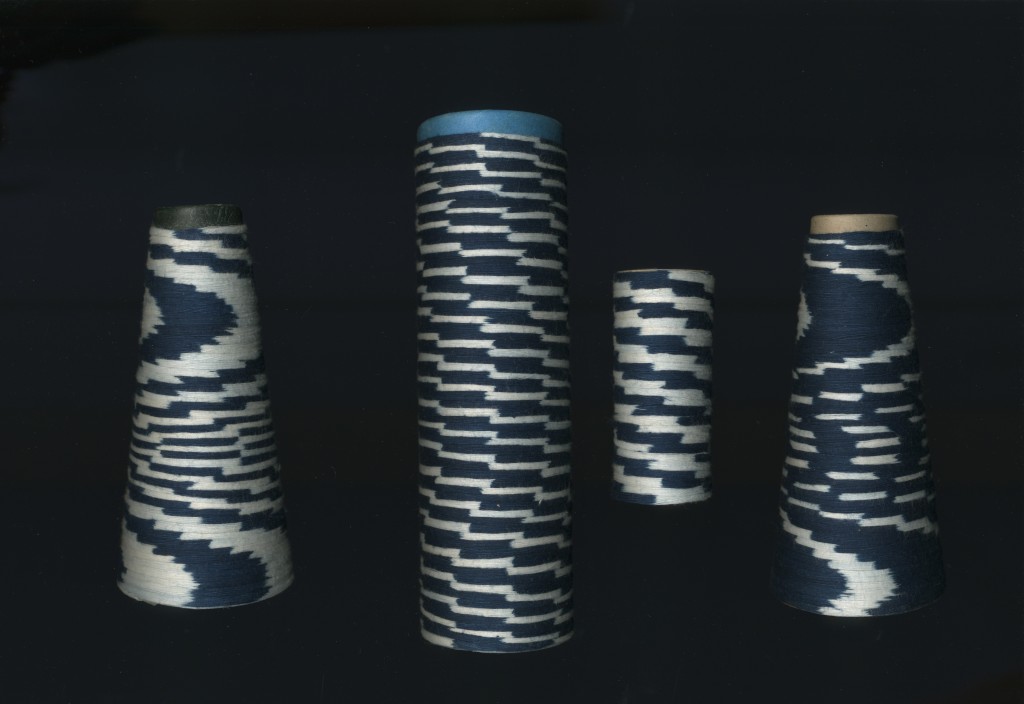 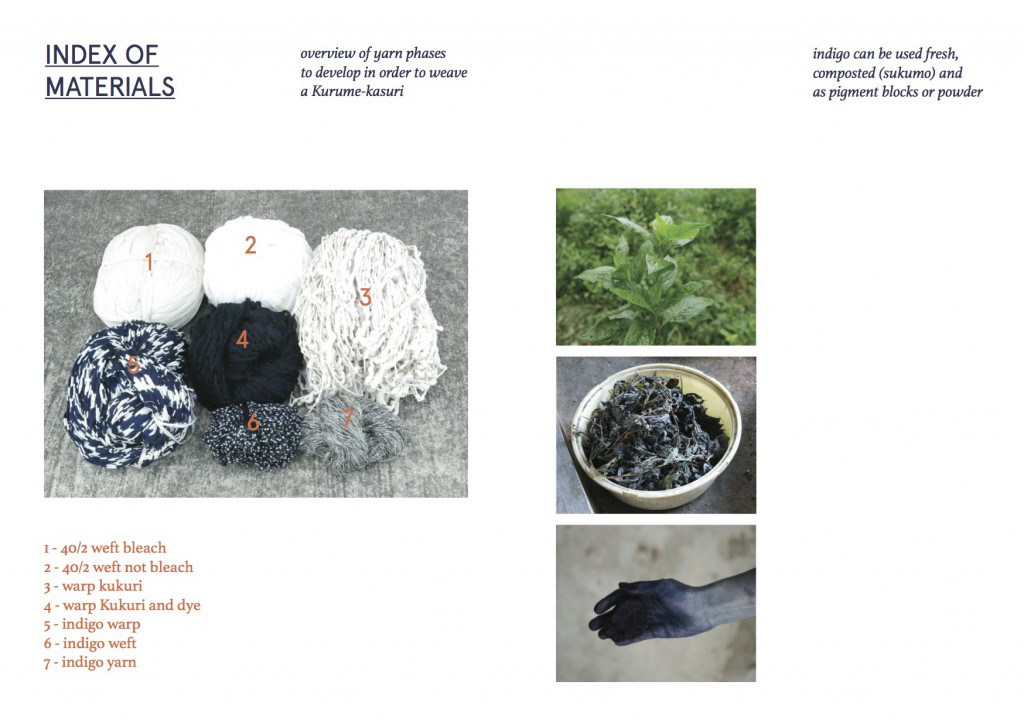 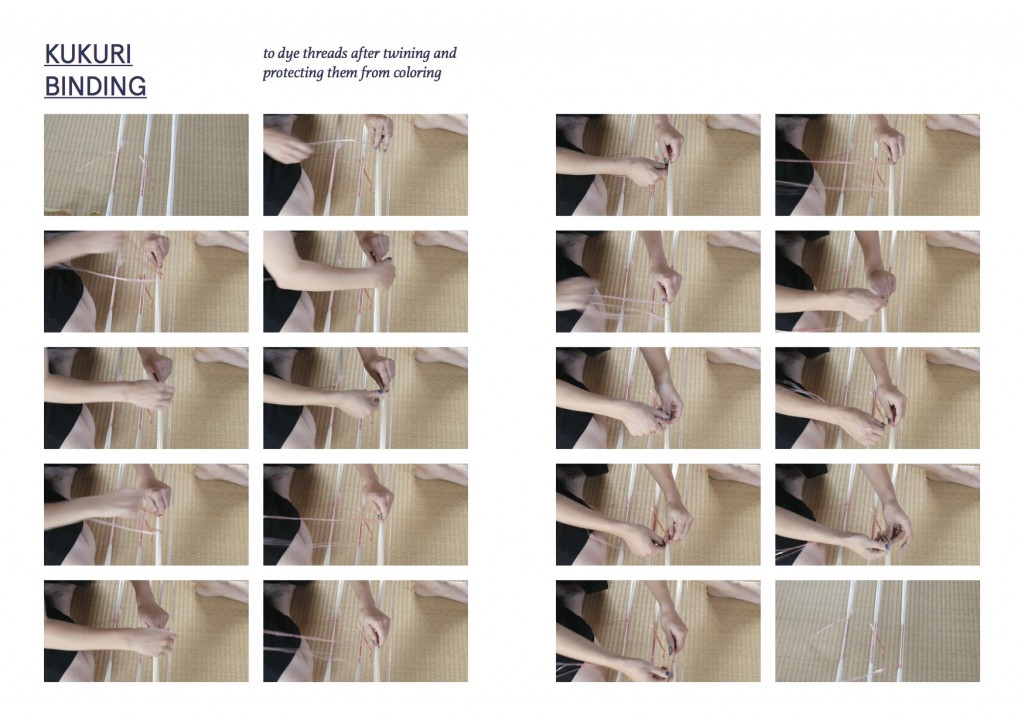 An ongoing research dialogue by artist-designer Aliki van der Kruijs and curator Lenn Cox. With Band Essay №1 we investigate through material, words and images our personal connection with the Japanese cultural and natural environment, an interest that we share together and implement in our daily life. In collaboration with photographer Lonneke van der Palen an essayistic collection images is produced based on our research and dialogue. 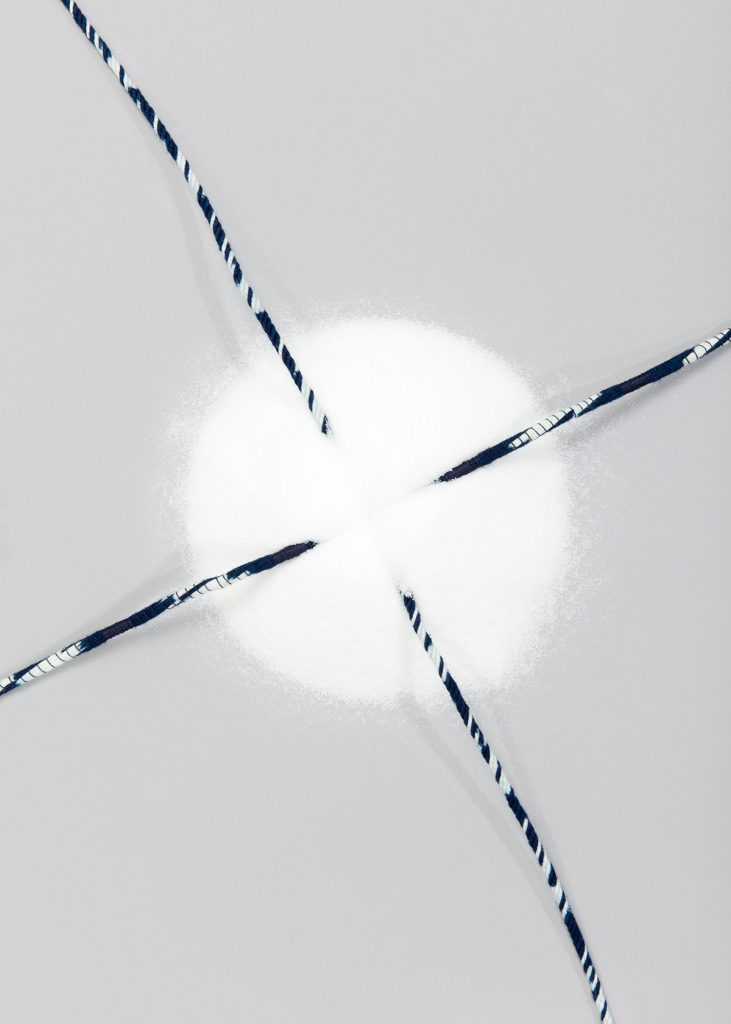 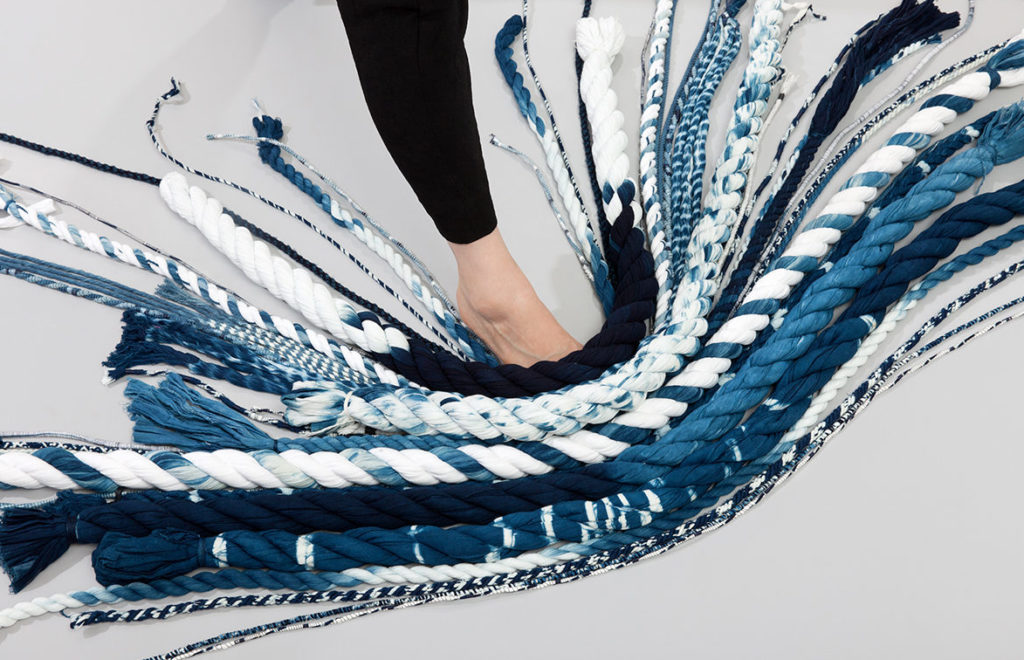 BACKGROUND
Indigo: Sharing blue is a shared heritage project about indigo and its use for textile techniques that originated in Japan and in the Netherlands in period 1650 from 1850 (Edo period and part of the Dutch East India Company period). At that time the use of blue dye was immensely popular in both countries. Indigo came from Asia to the Netherlands and spread all over Europe. In Japan indigo is still being used, in Europe dying with indigo disappeared with the invention of a synthetic dye.
Now a day crafts are still imbedded in society in Japan, it is a part of its traditional culture, but the crafts are not being reinvented. In the Netherlands knowledge of techniques is slowly disappearing, but there is plenty of innovation. This crafts exchange is a great opportunity for both cultures to learn from each other.

Crafts Council Nederland invited four maker-designers (Maaike Gottschal, Aliki van der Kruijs, Liselore Frowijn and Adriaan Kundert) to travel to Kyushu to explore the indigo heritage from the Netherlands and Japan during a crafts exchange in September 2016. They examined uses and traditions and revived the craft, which is surrounded by many mysteries. How does the oxidation process actually work and how can you record the different stages? Can you paint with indigo on textile? And how can you re-imagine traditional techniques? The designers learned directly from experienced masters and investigate the value of indigo for creative and sustainable solutions and for contemporary applications in fashion, design and art. The results were shown during the Dutch Design Week (in the Kazerne from 22 – 30 October) and on Kyushu

400 years Holland-Kyushu
On Kyushu, the second largest island of Japan, the Netherlands and Japan first met in the seventeenth century. Besides economic and political interests, which sometime collided with one another, a mutual creative curiosity arose and still exists today. In 2016 and 2017, this is celebrated with the cultural collaboration programme Holland-Kyushu. The initiators of this program are the Dutch consultancy and organiser for international cultural collaboration DutchCulture, and the Dutch embassy in Tokyo and the Consulate General in Osaka. hollandkyushu.com